..Drop me a line, stating point of view..

Busy busy busy…..
Went to the eye doctor yesterday and now have proof that I am getting old and falling apart. I’ve always had bad eyes and bifocals since I was 10, about five years ago switched to tri-focals.  Went in yesterday and my vision had gotten so bad that they kept retesting me thinking something was wrong with the tests.  I dont’ get it.  They didn’t either.  My vision with my glasses was 20/80 & 20/30.  So, obviously new perscription.  The best they can get me up to is 20/50 & 20/20. That’s why they did all the tests.  One eye just won’t focus.  Stupid lazy eye!  He also said my eyes look bad.  I have cysts.  He thinks it’s all allergies and gave me some perscription eye drops.  Who knew.
My new glasses will have some freaky lenses since they can’t do anything more with the current lenses. (progessives)  But the new ones cost a fortune and take six weeks or so to make.  I’m glad I only get new glasses every couple of years.

I’m hoping this will help with reading.  I’m having so much trouble getting in to books.  I assume it is because my brain is so busy focusing on trying to read the words, that I’m missing the context.  I miss reading.

Got woken up at 2:30 am for the 2nd day in a row and couldn’t go back to sleep.  Someone at my house will be hearing more about that particular subject.

Supposed to be meeting my sister and clan for dinner tonight at CiCi’s Pizza but haven’t spoken to my children to clear it with them.

So, to summarize.  I’m blind, sleepy, and lonely.  Pathetic!

Oh! Wait! One more thing.  At the doctors office the technician, Brandy and I got off on a tear and were laughing for about 45 mintues.  And then she was trying to explain to me the way that smoking damages your eyes, but what she said was, Sex is bad for your eyes.  The look on her face was wonderful.
I’ll probably be back, but for now, done with my yogurt so back to work.

I believe nuts in the shell are the perfect food if you are trying to lose weight.  Not only are they healthy, but it takes so much effort to get them out of the shell that you do no eat very many.  And as an added bonus you always end up eating some of the shell so you get fiber too!  I think I”ll go to Meiers today and get more pecans & walnuts & almonds.  No more hazelnuts or brazil nuts.

I have a pair of jeans that right now fit me PERFECTLY.  I love my pants.  Which means I’ll either bleach them or rip them or gain weight.

Last week I was blow drying my fairly long, very thin & fine hair and I got an idea for a story (I get great ideas, it’s a shame I cannot write) and after about 20 minutes I realized I had been standing there pointing my blow dryer at high heat onto my fine dry hair while I composed this story.  My hair is toast.

I really want to paint without using my brushes just using my hands and fingers.  But I really don’t want my hands that stained so I haven’t.  How lame is that?

Everyone over the age of 40 should go read this persons blog today, because it is very funny.  No one under the age of 40 because you haven’t lived long enough to be allowed to laugh at those of us who have.

Okay, my name isn’t Michael and I don’t have a darn thing.

I’m having a frustrating day here at work. I keep getting on a role and getting things done, and then BAM hit a brick wall and have to wait for someone else to finish something before I can go on. I tend to run at full speed when I’m working. Once I know what I need, or what I need to do I like to just do it and be done. ~sigh.

I had a frustrating night at home last night too. I was watching Jericho and my husband sat down and proceeded to make fun of it. I hate it when he does that shit. We’re such an odd couple. I’m a very positive person, I enjoy things. Just in general, I always enjoy things that are around me. Smells, sights, people, things. My husband enjoys being negative and insulting things. Most of the time he doesn’t really mean anything bad, it’s just what he enjoys doing. Criticizing and making fun of things. It can be tiring. Especially if he’s mad about something else because he’ll never say it, he’ll just get more negative and more negative until something gives. It exhausts me.

I was reading a Xanga on a pretty regular basis, and occasionally commenting on it. The xangaette would then comment on my comment. But it was always mildly critical or chastising. I always got the feeling that somehow they were “better” than me? Drove me nuts. Then just recently it dawned on me, that I could simply unsubscribe. I know that sounds silly, but it’s like once I made the commitment to subscribe and read, I couldn’t stop. And then I did. How liberating!

I enjoy reading Xangas that I can identify with. Not people who are necessarily similar to me, but who have something in their lives or personalities that I can say, Oh, me too!

I stumbled across one last night that the person was talking about childcare and that she and her husband worked opposite shifts so that they didn’t have to use childcare. I really empathize with that. It’s tough. We did that for years when the kids were little. I don’t know how people afford child care full time. Oh, I just realized I wrote when the kids were little. You know as opposed to getting them child care now….while they’re in college. LOL.

Oh well, on I go, hopefully to a good and productive afternoon.

What ugly weather we’re having today.  It’s cold, and rainey and gray and windy.  I have to leave soon and drive home and get my daughter and then drive her to school and then back to work for me, I’m not looking forward to it.  I normally don’t mind.  It’s good to get out of the office for an hour, but uhg.

I’m going to try my hand at a protected post now.  Bye!

I just drove by the wonder factory and it’s smells like dinner rolls baking.  What a fabulous smell!  I go by there so often and I don’t think I’ve ever smelled it before.

Also..Someone else in the city has my bumper sticker!  I have a very unique bumper sticker in my back window that I bought in Salem, MA.  It’s so unique that more than once I’ve been someplace and heard people say – oh, did you see that bumper sticker out in the parkiing lot!.  But today Dennis at work told me he saw a different car with my bumper sticker! PAH!  Better not come by me, I’ll snatch it.  It better at least be a cheap imitation and not look as nice as mine.

This is what DailyOM had to say about keeping a diary.  For me, Xanga is a diary, just a little more public.

Keeping A Diary With Purpose

A diary can play many roles. It can be a confidant, a vehicle of self expression, a tool that facilitates clarity of thought, or a repository of dreams. A diary can also be a powerful source of comfort during challenging or traumatic periods. When you record those insights and incidents that clearly demonstrate you are on the right track, you can return to your words days, weeks, or months later and find uniquely soothing reassurance. A diary with a specific purpose can be a good tool for keeping track of experiences before the passage of time can skew your perception of events. It reflects the immediacy of your life and thus provides you with a landmark to return to when you begin to doubt yourself. If doubt does arise, simply open your diary to reaffirm your experiences. The confidence, surety, passion, and bravery you felt in a single moment is preserved, giving you a means to recapture those feelings in any place, at any time.

How many pictures of yourself can you post before others question your humility?  My daughter told me a while ago I should use this picture of me. Once again, at work.  I really don’t work that much but I do tend to be obsessive. So my life ususally revolves around one thing at a time.  I may start occasionally doing protected posts so I can actually talk about work.  There is so much going on right now, but I’m really not comfortable with it being general knowledge for any one who comes in.  I may do it this afternoon and see how comfortable I am with it.

Erin (my sister) -I did the workout again this morning, and my back did hurt for an hour or so.  And now I have so much energy that I am bouncing off of the walls.  For the rest of you, we’re talking about a free DVD that came with the book, You – the diet.  the beginner workout looks really easy, it’s all about stretching and holding rather than cardio or weights.  But oh Geesh!  The beginning of the DVD, instead of the standard FBI warning says – Please! Copy it, distribute it freely!  I thought that was great.

I scanned this picture it the other day.  Love this one of my babies.  I wish it was in better shape.  I believe this is 1992. 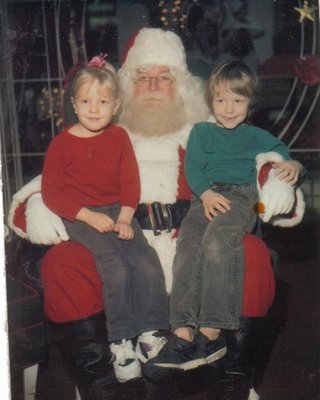 Oh! One more thing.  I’ve noticed that my spelling & grammer have become horrible!  Please feel free to nail me on it.  But not punctuation!!! I have my own rules for punctuation.

Me, at work last week.