I am nonsensical today.

I am defrosting one of the freezers at work.  Oh, what a glamorous life I lead.

I found a little tiny martini glass at the GlassOutlet store yesterday.  Sadly my husband pulled it out of the bag and dropped it.

At 3:43 am one of my dogs decided that she wanted to sleep in the dog bed in our bedroom. It was unfortunately already occupied by a different dog.  So she just stood there growling until the other one started growling.  Then they both growled for awhile.  Until I got up and chased one of them out.  The third time I chased her out, she got the idea.  Silly puppies.

The new office space I found has been rejected by the people who sign the checks. Back to the drawing board.

For anyone who hasn’t seen one in action.  Watch the blue in the neck.

Yeah, I know.  I”m a goof this weekend. Off to the Libby Glass
Outlet to see if I can find a suitable cordial glass for my birdie to
drink out of on my desk.  Enjoy your day.

It started out like any other day, but in this world you just can’t predict the future and what may look like an ordinary sunny Saturday can in an instant turn into a heartbreaking moment never to be forgotten.

I was happily applying my many layers of makeup, when my loving spouse popped around the corner.  After recoiling in shock at seeing me without the 17th layer of beauty he recovered enough to tell me that a package was waiting.

I happily ran into the other room and there it was!  The delivery I had been waiting for!  It arrived just a few days after I had ordered it but it had seemed an eternity.  I gingerly picked it up and ever so carefully carried it to a safe surface where I could release the two additions to my family!  Such a joy and aticipation I haven’t felt in a long time.  I still remembered that moment when I saw them in the online catalog. My heart felt like it would explode at the memories they conjured up, joyous childhood times and carefree moments.  Watching these creatures perch, and entertain.  My beautiful feathered friends drinking with their dainty beaks.

So I carefully opened the box.  I knew something was amiss almost immediately.  I could see the red stain on the outside of one box.  The horror!  One box covered in red while the other remained pristine.  With a heavy heart I opened what had now become a tomb for my never to be companion and it was as I feared.  It’s abdomen shattered and it’s life force spilled onto the sides.  The companion looked on, with no remorse.  It was I fear a case of  fowl play. 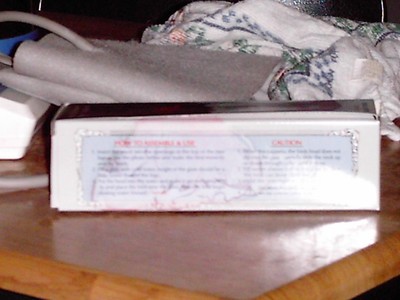 The road is long….

I only had three hours sleep on Thursday night.  I was having some panic issues! So most of Friday is a blur, but I made it through, we all survived.

I bought a bottle of AppleJack (apple brandy) last night.  I had never had Apply Brandy, just wanted to try something new.  OH MY! Went to bed at 10:00 pm. Slept like the proverbial log until 2:45 am.  Sigh…but then I slept some more, just not well.  Got up for the day at 7:30am, and here I am!  Couple of load of laundry in progress, computer cleaned, and ready to go on with my day.

Right now, I am alone in the house.  It’s a little strange.

Enjoy the day everyone!

Oh wait!  Last night I had a pizza made out of a pita, it had pureed Eggplant, roasted egg plant, feta cheese, spices & greek olives.  Oh!  It was soooo good! mmmm.

If a tinker were my trade..

Our local paper quoted me $495.00 to run a small help wanted ad for 6 days, with 30 days of online visibility.  They use monster.com for the online portion.

Monster.com charges $395.00 for the same ad for 60 days, but of course no print in local paper.  Because of a fluke I ended up getting the Monster.com ad for free, so of course I made the choice to run that one!

I have gotten Deluged with resumes in the last 24 hours.  Unbelievable.  And this is for an entry level no experience, part-time almost minimum wage type job.  Crazy!  I wish I owned stock in Monster.

I’ve seen it rainin fire in the sky….

Do you think the universe is trying to tell me something?

Looking back on this entry there does seem to be a pattern!

Oh! but yesterday I also got the results of my mamogram, and I am happy to say I can stop with the six month followups and going to yearly. 🙂
GO!  Right now! Call and make your appointments to get yours done!  You know who you are.
Have a great day!