Went to the dentist yesterday.  I had a cap that was loose and he warned me two weeks ago to be very very careful not to pull it out and lose it before the appointment.  I also had a little tiny cavity in the tooth next to the capped tooth.

I have Horrible teeth!  I swear they are so weak you could stick a pin through one.

Speaking of sticking a pin through one….so the Dentist gives me some nice Novocain, while it’s working it’s magic I say, “hey Doctor, how bad is this going to be, pulling the cap off?”  I hadn’t really thought about it until just then.  And he said it wouldn’t be bad because it was pretty loose.  NOT!

I guess what happened is that the cap was loose are the edges but firmly cemented in the middle.  It took many many minutes with a chisel and hammer to take it off!  Found that somehow a little piece of my tooth had broken so he plucked that tooth piece out.  Which was not all the way broken off!  Oh my it was quite the moment.

Then he starts drilling on the little bitty cavity while the gum under my cap is clotting, and he keeps drilling and drilling and drilling, and says, hmmm. guess it’s a little deeper than we thought, then BAM!  Hits that nerve!  All in all a normal appointment for me.  Sigh….I do love Novocain.  I, of course, took pictures when they left the room. I’m such a dork. 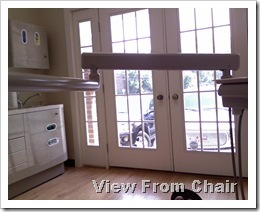