I can only blame this on brain misfires.

So let’s say it’s year 2 of the whole something happened and the world is starting over. No phones, no city services, no handy dandy grocery.

One day you and your neighbors are hanging out just enjoying your days end.  Secure in the knowledge that you have survived one more day.  You hear a strange noise and look around. A distance away you see a tree swaying all by itself.  Then you notice a shape in the tree.  Oh my goodness, it dawns on you.  Smack dab in the middle of what use to be the height of suburbia is now a very large bear up in tree. This bear has got to be the biggest bear you’ve ever seen.  Migrated?  Escaped from zoo? Who knows.  Then you hear crashing.
The bear falls. Crashing down down down, breaking branches as he plummets.
The bear is now lying on his back giant front paws moving, back legs very still, and the bear is making a horrific sound.  His monstrously large head with teeth gnashing is whipping back and forth as he howls in what can only be agonizing pain.
What do you do?

So if I come to your door, Let me sleep on your floor. I’ll give you all I have, and a little more.

Yesterday I bought a $15.00 stationary bike for the office.  My co-worker went and picked it up for me.  I’m inordinately excited. It’s very loud and causes quite a breeze!

I am going to start the process of planning a trip to Chicago and or the Chicago area for late in June.  This will be my first trip with my sister as adults.  It’s also very exciting. I hope many people will be able to meet us!  If you were one of those people do you have dates / days that are good for you and others that are absolutely not?

My doggie does not feel good. One of the is not eating and looking all and all pretty pathetic.  She’s always had a sensitive stomach so we’re not overly worried, yet.  Just keeping an eye on her.

I believe I will be going to a car lot this weekend to assist my husband in looking for a new car.  We will not be buying, just considering. Still, good fun.

I am feeling my creative wave start.  This means in another month or so I will have to be painting, or sketching or crocheting or something. 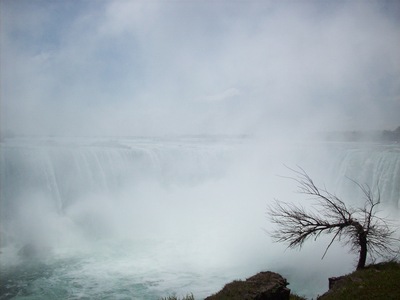 This pic cycled through on my screen saver.  Took this last year on our Trip to the Canadian side of Niagara falls.  I like the tree, and the falls behind the mist
Busy week so far.

Friday I took apart my work laptop and installed a fan.  It was quite exciting to have it boot back up successfully.  This morning I took apart my work keyboard.  I love this little keyboard that my daughter just gave me, but the arrow keys stick.  After staring at it for a few moments I realize the whole keyboard sits slightly crooked in it’s frame.  So I took it apart, looked at it and realized that it would never work again if I fixed the slant.  So instead I totally Macgyver’d it!  One paper clip and a small piece of tape and all better.
If I lose my job maybe I’ll start a new career as a "fixer".

Taking my husbands car in today to get the brake lights fixed.  It’s not really that fun driving without brake lights.  My husband is coming home a week early and will be home tonight.

Has anyone used Bay Seasoning?  What does it taste like?

Fleshing it out a little.

This is what I had in my head the other day originally that warped into what if all the males over the age of 10 disappear.

What if I wake up tomorrow and 9 out of 10 genetic blood lines have disappeared.  This fulfills all of my requirements for an apocalyptic story.  I can get rid of 90 percent of the population without blood and gore.  No relatives will die, and everyone I’ve ever known stands a 10% chance of surviving it.  Still more than enough people to rebuild the world, without so many people that life can just go on as normal.

The genetic tie in will be obvious pretty quickly.  This of course will lead to family history’s being documented and learned by all surviving members.  I think it will most likely lead to an almost clannish society.  No genetic trait will be missing.  There are people of every race, every hair color, every eye color.  It’s obviously not based on a certain trait.  ( I think the really smart people will make sure as the generations progress that they add in as many different family lines as possible in case in a few hundred years it happens again)

I imagine that first morning it will take a little while to figure out there is a problem.  It’ll be a Saturday morning.  I’ll wake up as normal.  Oh, I think my husband will be out of town.  So I’ll wake up, feed the dogs, get my coffee and curl back up in bed to watch tv for awhile.  First clue something is amiss.  No programming on most of the channels.  I’ll think it’s odd, but whatever.  Watch something on VOD.

I think my morning will carry on as normal, just quieter with an odd feeling. Can’t quite put my finger on it.  Then it will occur to me that I haven’t heard any cars go by, and that’s when the story really begins.

Most services will stay on for awhile, I imagine some will continue for many many years without maintenance.  It will be hit or miss on what remains.  Depends on who remained that knows how to run things.

I think I like this one, maybe not a story.  Better as a TV series.

I need a podcast downloader/sorter/subscriber that is NOT iTunes.  Anyone use one they like?