This morning I scrubbed 1/4 of the kitchen floor.  I wish I had a giant electric toothbrush to scrub with. 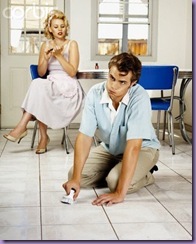 But anyway, that is not what this is about.  My husbands computer is right off of the kitchen.  So, I opened up his music folder and hit Play All.  There are Five Thousand, Nine Hundred and Twenty Five files in his music folder.  That is a lot of music.  Twenty gigs.  We are music people.  We are however not music snobs.  We will listen to anything.  We just like what we like.

Historically music is related to time periods.  For me the last couple of years would be the So You Think You Can Dance years.  We watched this show last year and I really loved the assortment of music chosen.  They always put the artist and title at the beginning of the dance.  So if it was one I liked I would hit rewind on the DVR, grab the artist and tell my husband to find me some music.  The next day I always had a couple of dozen songs by the artist to throw on my MP3 player. (Creative Zen, I’m not an iPod person).  This year I haven’t really watched the show but my husband has so I hear the music. Same ritual.    I’ve found some Artists that I really love, (The Frames) and some that apparently I only like when other people are dancing to abbreviated versions of their songs.  (Blue October)

We have quite the assortment.  This morning while scrubbing and listening to the music on his computer, which means it’s all of my music plus all of his music, I heard The Frames, Elivs Costello, Barry Manilow, Kelly Clarkson, Fleetwood Mac, Adele and Elton John.  Well, that’s all I remember hearing.  I couple of months ago I made a concerted effort to adjust my listening habits.  I needed to add in some current music.  I was getting entirely too stuck in older songs.  So I found a couple of radio stations that I liked and also that stream.  So I listen to those in the car and at work instead of MP3’s.  It’s been good to hear that new fangled music that the kids are listening to.  I have discovered some good music this way.  Airstream Driver by Gomez was my current favorite, but even on streaming music they play it entirely too much.

I have no plans for this weekend.  Just a little grocery shopping, and if it dries out I need to mow again.  I had to mow the grass last weekend with the blades up high because it was so long and so wet.  My husband is going to be in Virginia for a week.  Half of me thinks I should have gone, the other half is thinking about things to do while he’s gone.  I know it sounds odd, but normally I clean when he’s gone.  I think it’s because there are no time or space limits. I can turn on loud music and clean without worrying about disturbing him.  Or I can turn on the Television in the Kitchen and clean cabinets while I watch Big Brother instead of sitting in the living room.  Just a shake up in the rituals.  I still hate my new glasses after a few months so I think I’m going to order new lenses for my old frames.

Off to find breakfast.

And now for a little look under the bed sheets