This is what my brain looks like on a day off

I’m at home today instead of work.  I have some things I need to take care of because it’s the last day of the month, and then tomorrow some things I have to take care of because it’s the first of the month, and I can see right now one of my oldest customers sending me emails as “high priority”.  There are days when I miss being a waitress.  No one ever sent me high priority messages saying I need some more coffee!  I guess I’ll answer him when I get done with this.  Even though my answer is, “No, you’re remembering this wrong.” I have the same conversation with him every 30 days,and there is nothing I can do for him.  Frustrating.

I’m loving my new iPod Touch.  It’s my new mini laptop.  I don’t use it for music, I have an mp3 player for that. This is for games and the wifi. 🙂

Going out for dinner tonight with my husband, my daughter and my step-son, and the respective boyfriends, girlfriends.  That’s always nice.  I love family.

I’m reading a book called Well Enough Alone by Jennifer Traig.  I’m enjoying it, but I find the reviews on book sites really interesting.  Some people really hated this book.  I think it’s fascinating how people can have such widely varying opinions about things.  Books, food, music.  Beauty really is in the eye of the beholder.

The other exciting part of my day is going to be a trip to the grocery store…by myself!  oooo, been a long time.  I want to buy ingredients to try a new soup recipe that I found through my Dr. Gourmet website.  I love this guy.  You see him all over my facebook and twitter too.  I’m always recommending or sharing or retweeting his stuff.

My recap of 2009 – Tough year with little progression, but I’m still here.

I can now tell the story of the tickets.

Wicked is coming to Toledo in April.

One might guess that I would want to see this.  The only person who maybe wants to see it as much as me, is my niece.  So when I found out last year that it would be hear in 2010 there was no way I was not going to see it, and I thought I would buy three tickets.  My Kates, my niece and myself.

I did some research found out when the tickets would be on sale and started marking it on calendars.  The tickets did not go on sale until the first week in December.  For months and months I have been double checking dates and verifying and getting more and more excited.

As the sale date got closer I started hearing more and more media about it.  And then I heard the news, they were expecting the tickets to sell out within a few hours. They were planning on people lining up hours and hours before the tickets went on sale at 8am on a Saturday.  I was horrified. It’s not good enough that you get tickets to this thing, because of the venue it’s in, you have to get good seats.  The seating is horrible.  There is almost no slope to the theater and if you’re under 5’5″ you are not going to be able to see.

So, my husband was dedicated to getting me up and in line early and perfectly willing to stand out it the snow with me. The week before I was obsessively checking every day to make sure I didn’t have any details wrong.  Then, on the Thursday before the tickets were to go on sale I wandered over to ticketmaster and that’s when I noticed something odd.  The purchase screen where it normally tells me tickets are not on sale now has a new box on it.  And this box says “PreSale code”! PRESALE CODE????   Son of a Bitch!  Somewhere out there is a code that will get me tickets early!

I spent hours googling every phrase I could think of to find a back door or contest or something somewhere that would get me that code.  No luck. I cannot tell you how bummed I was.  The last thing I did was go back the venues website and follow their twitter.  I was hoping that I would get some info from it.  I logged into my twitter account and the night before they had tweeted one word.  TWEET.

I held my breath went back to ticketmaster, typed it in and BAM! 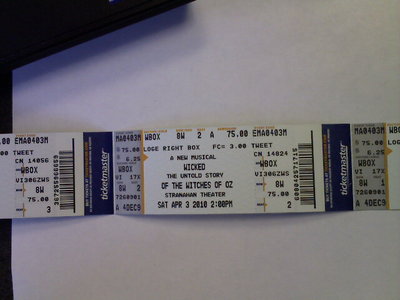 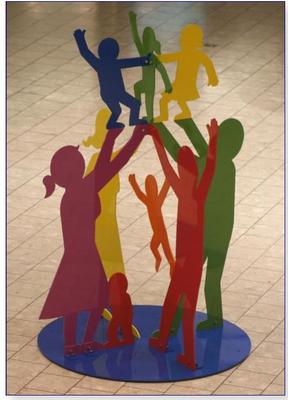 It’s about the celebration of family and friends, and the renewal of what makes us feel whole and part of something bigger than ourselves.

Not enough time before Survivor for Weeds.

Been kind of an odd last week or so.  I’ve been having nightmares, or at least bad tense dreams almost every night.  Then I wake up at 3am and just be anxious for an hour or so. Feeling just a little too stressed out about a couple of things. I took Thursday and Friday off so I’ve had a four day weekend and it’s been very nice.

We’ve been watching movies for the last week.  There was a shot in Inglorious Basterds out a window onto a hill and I have been obsessed with it the last few days.  So today while my soup as cooking I started painting it.  That’s when I discovered I was out of white paint.  Who runs out of white?  No matter, I made do.  I did the background of it in acrylics but I think I’ll do the foreground in oils.  I don’t use oils much.  Mostly because I hate cleaning them.

Today I realized that my hair is below my shoulder blades.

I’m watching season three of Weeds.  I keep thinking about subscribing to Showtime just for Weeds and Dexter.  I’m only on season two of Dexter.  I buy them as I find them at the used DVD store.  I don’t buy a season until I’m ready to watch it. This adds a whole lotta time between season viewings!  I swear I saw season four of Weeds on the shelf for months before I finally found season three this weekend. Of course they no longer had four.

I made Potato soup again today. Still not good! Need a vegetarian, taste like Grandma used to make recipe.

The picture was of the escalator in a metro station in DC.  Nina is always right. (isn’t Nina a cool name?  Don’t you just know that if someone is named Nina she is snappy?) 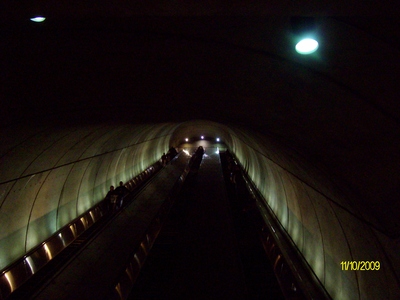 Laurel and Hardy got nothing on us.

I now upload pictures to three different places on a daily basis.  Xanga, Facebook and TwitPics.  I need to work out a better system.  I’m entirely to lazy to move the pictures around so they are on the program I want at that time.  So, no pictures today.

My weekend was a timeline of food.  Which of course is the norm for us.  Saturday I read and then we got the car washed, then…uh…something.  How sad that I can’t remember yesterday.  Then we went to ..OH!  Lowes.  We went to Lowes!  Then we went to Zias Restaurant.  It’s the Italian restaurant down on the river.  I love the look of the place more than I love the food.  Yesterday I tried the stuffed baked manicotti and it was very good.  They also have a butter that they mix in chopped up Kalamata olives into. mmm.  As we were getting ready to leave the manager came to our table and handed us a Ten dollar gift certificate. No idea why.  Just said it was a promotion.  Well, at least that will cover the tip next time.  I think I will make some olive butter next time I see a loaf of Italian bread I want to try.

Today my husband wanted to go to Ann Arbor Michigan (Go Blue!).  We went to Briarfield Mall.  It was unexciting.  But then we went to World Market where I bought my weight in assorted fun things, then we went to Trader Joes to finish filling up the trunk.  For dinner we went to Noodles.  This was our first time. It was pretty good.  The PotStickers were very good.  I was surprised by how much snow there was.  There is no snow on the ground in Toledo.
Watched three movies in 48 hours!  Taken (formula, but okay) No Country for Old Men (liked it, but not enough to grab onto) Nights in Rodanthe (more than I expected).

I haven’t been to a Yoga class in weeks.  I miss it.  Hopefully this week will be back on schedule.

What in your life can you say you mastered?  What is something that you can say “I was a Success!”?