What a blah day…Just wanted to nap all day!  But didn’t. 🙂

I’m so used to have just me in my yoga class, last night there were three other people!  It felt almost crowded. Good workout though.

Boring Blog…let’s go find a picture to put on.  I will go sneak into my husbands scanned pics.  BRB. 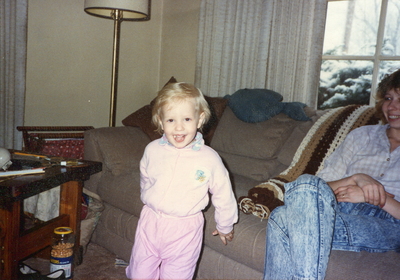 This is my beautiful Katy about 19 years ago. 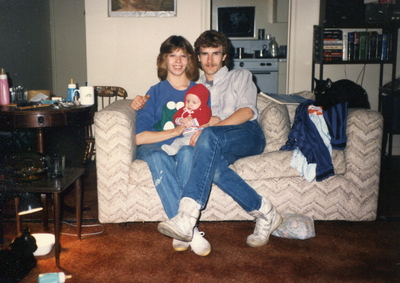 Geesh we were so young, I probably just turned 22 in this picture, which makes Corey 26.

Write in your diary: How do you feel today?

As normal as I can be

Thanks for all the ooo’s and ahh’s.  I am rash free today.  It was pretty crazy though.

I’m afraid I have nothing else to say today!

Write in your diary: How do you feel today?

My day so far in pictures..

Got into the office and found this. 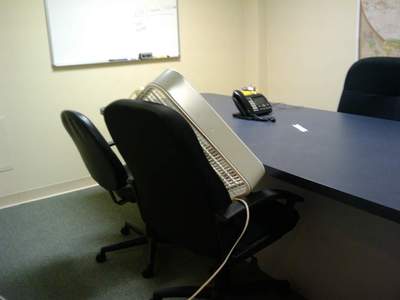 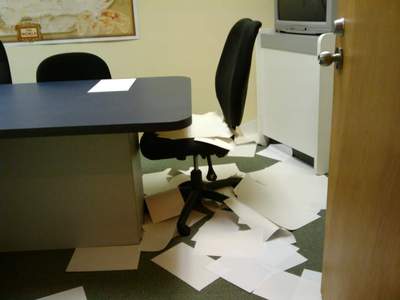 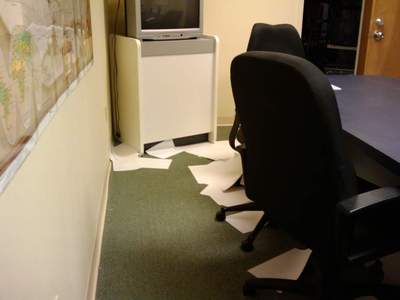 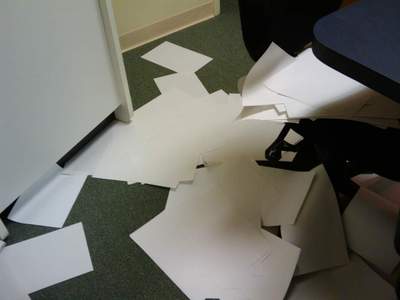 I won’t explain, I’ll just leave it to your imagination.

Then tried some new tea.  A free sample I got from Suffuseusa.com of Rooibos Green Tea.  Pretty tasty. 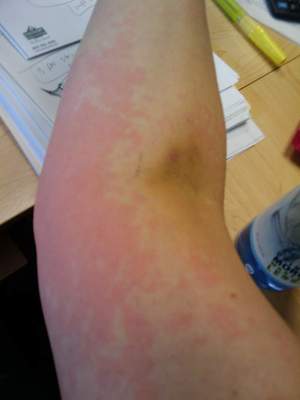 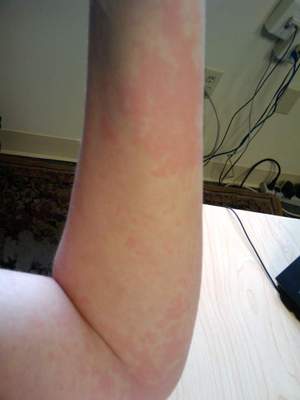 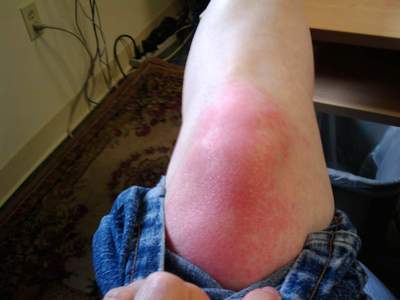 Unbelievable!  By far the most spectacular  rash (non childhood disease related) I’ve ever had.  Popped an anti-histamine and came home in case it got worse before it got better.

Mostly gone now but my skin feels weird.  Hope it doesn’t come back when the antihistamine wears off.  I have my annual nephrologist appointment tomorrow. (which explains the nasty bruise from the blood draw that I just noticed made it into the picture) I don’t think they’ll let me in with  that rash.

I dunno.  The weirdness of my middle aged body is both amusing and appalling these days.  I do know, I won’t be buying that tea, just in case.

I bought a small Japanese Eggplant and sliced it in about 1/4 inch slices.  Some bigger some smaller.
I dipped it in 2% milk, the did a quick light coating of Betty Crocker Instant Mashed Potatoes, the kind in the envelope that come in at 80 calories a serving.
Then I fried them over a medium high heat in a tablespoon of Olive Oil.

VERY GOOD!  The consistency depended on when I took them out, either crispy fried potatoes, or Fried Green Tomatoes. The calorie count comes in very low.  Maybe 150 calories for a very good sized portion.
These would also be good with some parmesan cheese mixed in the potatoes, then marinara to dip.  Gluten Free and you could definitely use soy milk for dairy free.  The milk and the liquid from the eggplant sort of rehydrated the potato mix and turned it into a good coating without using much at all.

I wish I had planted eggplant!

Nothing to see here…move along.

Good Morning!
No plans for the day. 🙂

Friday July 9
Write in your diary: How do you feel today?

A fungus among us

My new glasses are STILL not in!  Frames were back ordered.  The next theoretical delivery date is August 2nd.  Would be nice if instead of me calling after they were weeks overdue someone would call me.

When I went to the dermatologist on Wednesday he looked at a rash I have on my hands.  I get it a couple of times a year, mostly when it’s warm. Sometimes it’s really bad, sometimes not. Always Gross.  Lasts from a week to a few months.  He said it’s Dyshidrotic Eczema.  I’m glad.  I haven’t been diagnosed with anything odd for at least a year! 🙂  Prescribed a nice cream for it that the pharmacist has to mix up.  Very nice feeling, and of course, extra expensive!  But, hopefully I only need to fill it once a year or so.

my car looks very sad all alone in the rain in the big empty parking lot!

My eye is twitching.

So to sum this up;
I overslept so I look kind tousled
my allergies are bothering me so my eyes are red
I’m still hacking from my cold
I have a fungus on my hands
my eye is twitching
I bet you all are wanting to come hang out with me now aren’t you?

On with my day!

Thursday July 8th.
Write in your diary: How do you feel today? 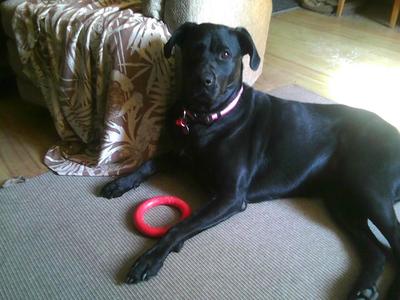 July 7th
Write in your diary: How do you feel today?