Another Day another Blog

I think it’s going to be a beautiful day despite what the weather forecast is.

Just got done riding my bike (on a stand in the back room) instead of normal Saturday morning Yoga.  I feel like a very responsible person for doing this.  My chest still hurts and I really want it to heal quickly so I’m trying not to be stupid.  I think it might have unswollen about five days after the accident because it hurt a lot more when I got home, but it was a different kind of hurt.  It’s always something with me isn’t it?  Weak immune system, weak joints but a strong attitude!

This is a picture of Curves.  I went Wednesday and Friday but only did the leg machines. I did them all three times.  Not terribly effective, but I didn’t want to get to far out of the habit. That’s Daisy on the left. Hard to believe she just turned 80 isn’t it? 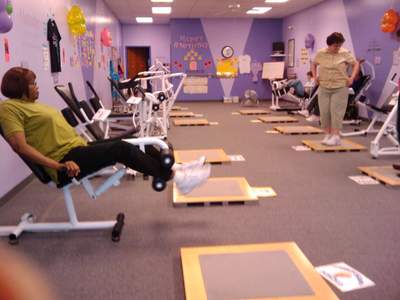 I think she missed me because when we were going into the building she said, “Well maybe you should go over to that Subway instead, you are too skinny.” ❤

I’ve been listening to the soundtrack from Away We Go all morning.  Great movie, and a great soundtrack!  My husband suggested it to me, and he was right!

I think today we’ll use our new GPS (Refurbished Garmin from TigerDirect-great deal and got it in two days LOVE Tiger Direct!) to find the Skyline Chili in Lima, Ohio.  Because we are that odd and will drive 90 minutes for lunch, then back. I will also get veg chili to go if we do, and see how it freezes.

For the crowd that has volunteered to take a trip to Florida, if we pay for it, to drive our car back, you’ll be happy to know that your sacrifice will probably not be necessary. Looks like the insurance company will pay for the transport. Not firm yet, but hopeful.

Off to find some breakfast, then shower and begin my day.