Shoulda taken the day off today

Well today should be the day.  This is the latest day that the biopsy results should be returned. I assume my oncologist also has the CAT scan results. I will call after lunch if I can manage to dial the phone.

To say I am apprehensive would be an understatement. When this whole weird odyssey that shall be known as the cancer diagnoses began I assumed mine was very progressed. I’m normally a realist so this wasn’t out of some sort of sense of doom it was simply based on the symptoms I was experiencing.  As I’ve learned more and discovered that it’s quite possible that I have two different things going on my realist self began to believe that this may not be advanced. Then I hear everyones wonderful stories about people who have survived just fine and that ray of hope gets a little brighter.  Then the Doctor gives me is pre-prognosis (Thanks Ilona) and I am very hopeful. Now, I am worried about being hopeful!  When I wasn’t hopeful I was prepared for the worst. Now, not so much. (Edit at Bottom)

When I was shopping at Costco there were a few things that were pricier and long term that I wanted but I thought to myself, well I better wait until I get the result of the biopsy.

I’m feeling a little gloomy and doomy today just because I didn’t sleep well and I’m feeling off. I feel like I’ve been fighting with people all week (oops, it’s only Tuesday!) and I’m too distracted and tired for it. I am not at my fighting best right now. I had an idea for writing up “How Lord Voldemort is like Cancer” but I ran out of ambition. However in preparation I did learn that Voldemort is in my spell check.

I was going to show you how my fingernails were the same color as my phone. There is one large flaw in that plan, I use my cell phone as my camera. So here you go: 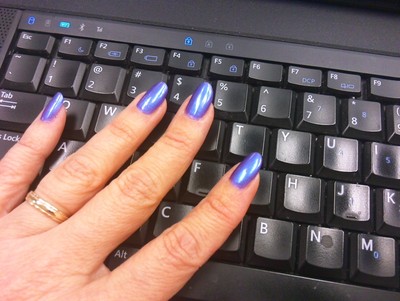 Now picture my phone as the same color. Obnoxious, isn’t it? Are you amazed my how old my hands look?  They’ve always looked like that even when I was a teenager.

The other big thing today is my hearing aid fitting!  I know it might seem a little odd to be excited about but oh boy am I looking forward to understanding what people are saying! I hope I don’t turn out to be one of those people who can’t adjust to wearing a hearing aid.

So I called the Doctors office.  Apparently they thought I needed some extra adrenaline because after 10 minutes on hold and getting picked up then back on hold and such she comes on the phone and says, Well, I’m sorry but we did get the results of the biopsy.  Yes she started with those words, and as my heart stopped in my chest, she continued with, and you do have cervical cancer. To which of course I replied, I knew that already!  Geesh. So, I don’t really have any good or bad news.  No, that’s not true, I have good news, the CAT scan did not show anything in my lungs or abdomen.  The biopsies of my uterus and other innard reproductive organs were inconclusive.  There was some suspicion that something is going on in my uterus, but they could not say what.  We also already knew this. (GP thinks it’s probably Endometrial hyperplasia)  So, we’re mostly back to where we were but with a little more positiveness.  Either way, everything is coming out on the 19th! Everything will get biopsied and we’ll go from there.