Somedays things just go from a little odd moment to a full blown attack of the giggles.

It’s started simply enough, and as many things do, with alcohol. 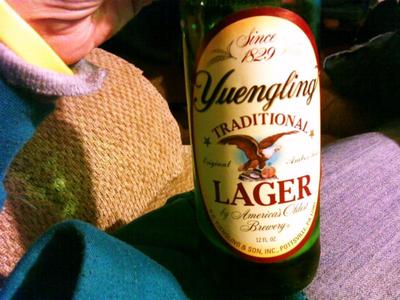 This beer is new to this area and my husband picked up a six pack of it today. He opened a bottle and poured it into a glass and then walked into the room I am in and offered me the last half inch in the bottle to try. I sipped a little (it’s good) and then as I went to put the bottle down next to me so I could grab my iPod my husband shouts out, “Well if you don’t want it, GIVE IT TO ME!” He was so oddly forceful with this statement that I stared at him for a moment trying to figure out if I misunderstood him. Then this became a whole bizarre conversation revolving around him explaining to me that it seemed I must not like it because I was putting it down next to me!. Doesn’t sound funny, but it was.

Then somehow this turned into a conversation about how he’s so odd because he’s very stressed. There’s that whole work thing AND his wife has cancer. Now I gotta admit, I probably could have been more sympathetic but he just sounded so put out that no one (including me was implied) felt sorry for him because his wife has cancer,that I burst out laughing. I think that the beer slowed his response time so I was able to pick on him at will for long moments before he caught up.

It’s good to laugh. It’s going to be a long two months.

Has anyone, anywhere, ever read “A Prayer for Owen Meaney?”

If I watch one more group of people on my television talking about other people playing football I just may hurl something at it.