Just a quick lunchtime catch up.

My new glasses had the wrong distance prescription in them. They are being remade right now. That will really screw with you if you have three different prescriptions in your lenses and only of them is wrong! I finally realized that it wasn’t just me getting used to a new type of lens (they grind them from the back instead of the front or some such thing) when we went to the movies last weekend and I was able to see the screen better without my glasses. That was a first.

Our home phone has apparently been broken for at least a week, I’m thinking it might actually be since 03/09/2012. No one noticed. ;)I finally got a voice mail on my cell phone that my sons doctors office had been calling for a very long time trying to change one of his appointments and no one ever answered! One of the phone cords was dead.

Speaking of phones! Now I can’t find my work cell phone. I went to grab it out of my purse this morning and poof.  And apparently the battery’s dead because if you call it goes straight to vm. Boo.

Speaking of purses! I don’t like my new purse. It just doesn’t hold enough, even though it is beautiful. It’s unique without being bohemian. Luckily my sister really liked it so I felt no guilt at ordering a new purse so I can give her my other one. Yay!  I really need to pack up all of my purses and sell or give them away.

I don’t have anything else worth mentioning in a public forum so I’ll give you a picture of Mili I found on my phone. 🙂 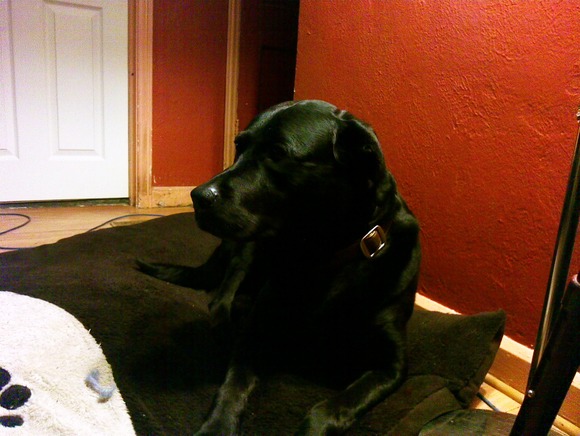 Comments on: "Just a quick lunchtime catch up." (0)