The picture I posted of my son yesterday was stolen from Barsky’s Facebook page. Yes, my daughters dog has his own facebook page.  With 109 friends. 🙂

This is my daughter and her dog last month when we had a beach day. 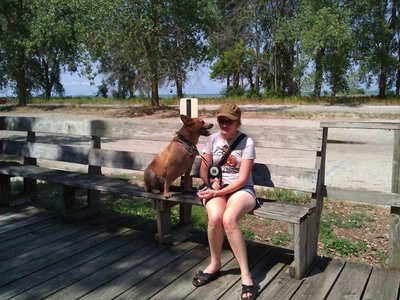 This is a more fitting picture of Barsky. Always in motion! 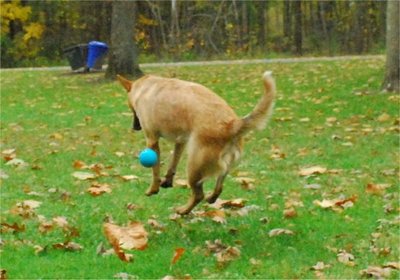 Last night it became clear to me that some of Barsky’s issue are from anxiety. He feels better when he is attached to someone.

First blood from him trying to be attached to me while I was sitting on the couch. He doesn’t seem to understand why he can’t sit on my lap. 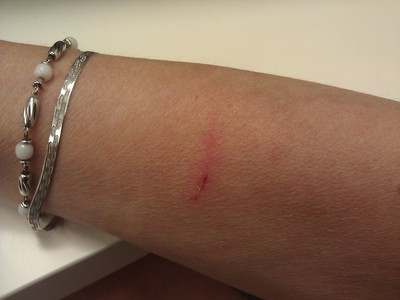 We did finally get some sleep last night. I put on his Thundershirt* and he immediately calmed down, then I went to bed. He pounced on the bed and we discussed where he should lay down. He laid on my feet. Not by my feet mind you, ON my feet. I didn’t care! I was so tired.

I woke up a couple of hours later when he moved to laying on my knees.

After that he was laying curled up next to my chest under my arm.

Next he had somehow managed to fit into the six inches of space between me and the edge of the bed and was laying with his big ass head over my neck effectively cutting off my oxygen supply. This was apparently the goal spot. We fought this one out for the next two hours. I  recognize this behavior as something dogs do when they’re lying together as puppies.  A puppy pile. He has been attached to me ever since. Well, not now. I went to work. Interesting behavior.

*let’s talk about Thundershirts for a moment. I knew what they were before I saw him in it. I have heard other dog owners talk about them on Xanga. For those of you who don’t, they are a dog coat that velcro’s onto the dog and is supposed to make they feel less anxious, such as during a thunderstorm. I have to say based on Barskys behavior I am now considering buying one to try on the beagle. What a difference! Immediate change in behavior. Went from psycho hyper dingo dog to time for a nap calm dog in seconds. When I took it back off of him this morning he immediately rev’d back up to normal (for him) speed. I don’t want to jinx the effectiveness so I’m not putting it back on until it’s time for bed tonight. I imagine it’s like swaddling a baby. My daughter is a manager at a PetSmart so he’s always got the coolest new trends in dog wear, but this one is a keeper.

A Rose by any other name…

Comments on: "In the jungle the mighty jungle the dingo sleeps tonight…" (0)